Exploring the universe is the most fun thing you can do with WorldWide Telescope! This section covers the views that you can choose from, and shows you how to navigate within each view.

To select a view, use the Look At drop down list (at bottom left):

Use Earth view to explore our own planet from a viewpoint in space. To enter Earth view, select Earth from the Look At menu (bottom left).

Use the Imagery menu to choose from the available imagery options, including aerial, streets, hybrid and nighttime views.

This image of Hawaii is obtained from the Virtual Earth Hybrid imagery:

There are several imagery options for the Earth, including aerial photography, streets, a hybrid of these two, and a night view. The night imagery is the simplest, yet it reveals information that the other views do not convey as well. In this tutorial we'll examine relative population density by comparing night and day images.

Use Planet view to explore the other planets and some of the moons of the Solar System. To enter Planet view, select Planet from the Look At

Use View , Reset Camera to restore the default view and settings.

Some moons are available under the Planet imagery, including Io, one of the best known of Jupiter's many moons:

Olympus Mons is the tallest mountain on Mars (and indeed the Solar System). At a colossal 17 miles high it is three times higher than Everest. The following tutorial locates the mountain:

Highly detailed surface images and elevation data are currently only available for the Earth, our Moon, and Mars. However, there is enough detail on many of the solar system planets and moons to locate their most notable features.

To View a Planet

Much more imagery data is available under Explore > Collections > Planets/Moons .

Use Sky view to explore the celestial sphere, the vast expanse above and around us. To enter Sky view, select Sky from the Look At menu (bottom left).

The Crab Nebula is one of the best known features of the constellation Taurus. It is a supernova remnant:

These images are detailed individual (or composite) pictures of the objects, and will be rendered over the background sky image. Note the down arrow in the lower right of the image. This can be used to show a much larger top panel, with many more thumbnails present. Interesting comparisons can be made by using the cross-fade slider (located in the lower panel) to compare the image you have loaded with the Sky Survey.

Note that Collections data can be in various modes; most are in the Sky

view. When selecting an object from a collection the Look At mode will be switched to the appropriate view automatically.

The context list in the lower panel is updated each time the view is changed. A single click in a context thumbnail (shown in the lower panel) will smoothly navigate to that location. Double clicking will skip straight to the location, NGC2555 in the example below. Hovering the mouse over the thumbnail will illuminate the object with an annotation in the main view (if the object is visible in the main view).

If there are too many context thumbnails to scroll though, use the up arrow to show many more of them:

All of the The View Menu options apply to the Sky view, except the 3d Solar System pane. In particular refer to the Observing Location pane to select a different viewpoint on Earth.

Also check the Constellation Lines and Experience options in the The Settings Menu.

Use View > Reset Camera to restore a default view and settings.

A conjunction occurs when two or more objects in the sky appear close to each other. The following tutorial tracks a conjunction between the crescent Moon, Jupiter and Venus that occurred on 1st December 2008.

Conjunctions are a visually interesting phenomenon that usually involve near-Earth objects. To examine a range of distant features of the known universe, try the following tutorial, or select the examples in the Context Search table.

In this tutorial you'll learn how to use the search features of WorldWide Telescope to locate our stellar neighbors.

This tutorial shows how to use WorldWide Telescope to plan an evening's astronomical observing. In the first set of steps, you'll learn how to set your location, and track the sun to determine the ideal time to begin viewing. Complete the tutorial by following the steps to help locate common objects in either the Northern Hemisphere, or Southern Hemisphere.

The bright star mentioned above, Rigil Kentaurus, along with its nearly-as-bright neighbor Hadar, are visible at the bottom of this image.

In this tutorial WorldWide Telescope is used to demonstrate the purpose behind some of the most commonly used terms in astronomy.

This completes the tutorial on astronomy terminology.

Explore the images sent back by manned and unmanned space vehicles.

The Apollo 12 landing site panorama provides some close up detail of the moon surface:

There is much less expanse to explore in panoramas than in the other viewing options. In most cases rotating the view will cover most of the content fairly quickly. The following tutorial simply goes through a number of the different panoramas, showing different presentation styles.

Use Solar System view to explore the Solar System in three dimensions. Zoom in to view the surface details of many planets and moons. Three of the most visited objects in the virtual Universe, the Earth, the Moon and Saturn.

Basic navigation is much easier using the lower panel thumbnails as the starting point, as there are only one star, nine planets, and five moons to choose from!

Three of the most visited objects in the virtual Universe, the Earth, the Moon and Saturn. For this particular image planet size is magnified to the maximum:

Refer to the 3d Solar System settings in the View

pane. Of great interest is the Observing Time pane, which enables the planets to be set in motion (more rapidly than in real time) and orbits to be observed, and also, for expert users of WorldWide Telescope, eclipse times and locations to be identified (see the Tutorial: Tracking a Solar Eclipse).

Use the mouse wheel to zoom out from the Solar System to view the Cosmos, pausing on the way to look at the Milky Way, noted for its two large spiral arms. The crosshairs show the position of the Solar System.

A solar eclipse occurs when the Moon passes in front of the Sun, as seen from some locations on Earth. The result is a spectacular mid-day darkness along a path across the Earth. To view the effect in WorldWide Telescope, go through the following procedure:

To see the same eclipse but in the Sky view use the following procedure:

Note that lunar eclipses (where the Earth passes in front of the Moon which turns the Moon's appearance a shade of red) are not currently implemented in WorldWide Telescope.

Sandbox mode displays an empty universe in which you can view arbitrary 3D datasets, and place your own 3D models.

NOTE: Sandbox mode is only supported in the WorldWide Telescope Windows Client.

Adding your Own 3D Models🔗

This section describes how to add your own 3D models to WorldWide Telescope.

The following keys are alternatives to using the mouse or joystick in any view, or provide additional functionality:

As an alternative to using the mouse, a USB wired Xbox controller can be used to navigate the view. Simply plug in the Xbox controller and appropriate device driver software will be located and installed.

The following table provides the purpose of the controller buttons:

Other compatible joystick controllers can also be used. If more than one is connected though, there may be conflicts, so for best results only one controller should be connected.

Clicking on the down arrow below Explore opens up the menu entries. 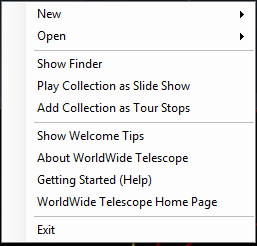 The New options start a new data collection of images, or initiate the tour creation process.

The Open options enable the opening of a tour, a data collection, an image (which will be placed in the sky if it includes AVM metadata, or simply centered if there is no such data) and, for astronomers only, a Virtual Observatory Table. Finally there is an option to load ESRI Shape Files.

Clicking Show Finder will bring up The Finder Scope.

Clicking Getting Started links to this User Guide, WorldWide Telescope Home Page links to the website.