WWT Study Chopper takes as input a study image, and generates the tiled multi-resolution image pyramid, in the correct folder structure and with the correct names, that WorldWide Telescope can accept as foreground image data. In addition to the image pyramid for each study, an appropriate thumbnail image (96 pixels wide, by 45 in height) and two WTML files are also output. One of these WTML files references the location of the thumbnail and pyramid at a local address — useful for immediate testing purposes — and the second references the intended public location when the work is ready for release. The content of these WTML files can be used as standalone files, or can be cut and pasted into a larger document such as a community payload file, or perhaps a collection of similar studies.

The tile pyramid structure, and WTML files, are explained in detail in the WorldWide Telescope Data Files Reference document.

The StudyChopper tool is very useful for data preparation, but its user interface is somewhat functional and navigating it is not intuitive. For the most part using the tool is simply a case of entering information in the correct order, which is described in the following steps. Running the tool will reveal the single dialog: 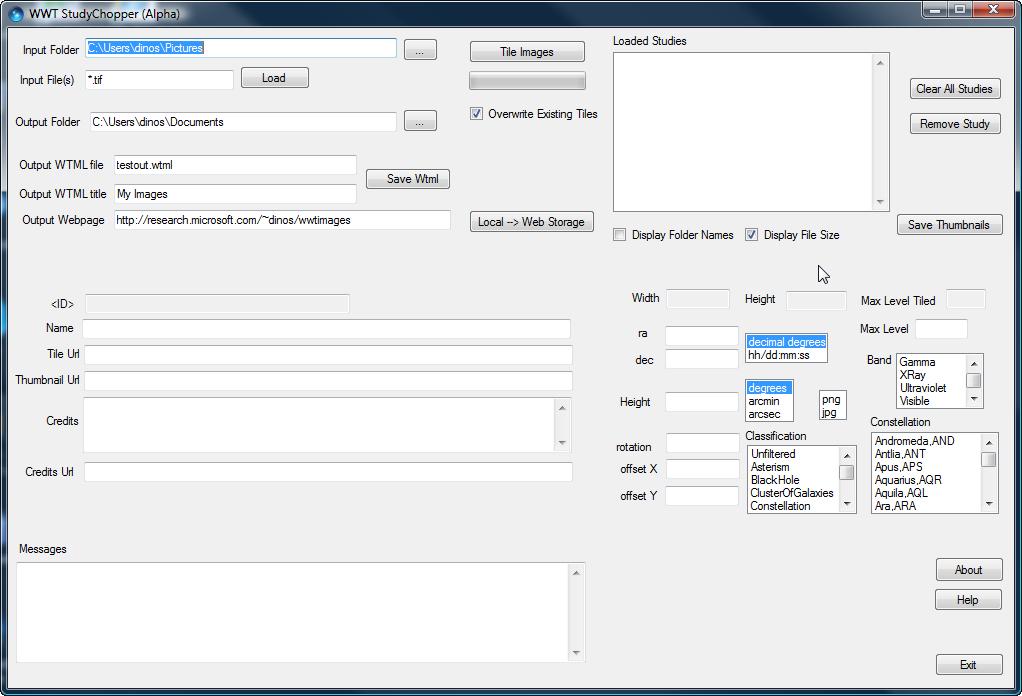 Before using the tool, place all the images for the study in a single folder. Preferred image formats are the lossless and transparency supporting formats such as .tiff and .png, rather than .jpg. Then go through the following steps:

The number 639246517 is the ID number generated by the tool, and is a unique number used as the top level folder name. The text box of the tool is read-only. 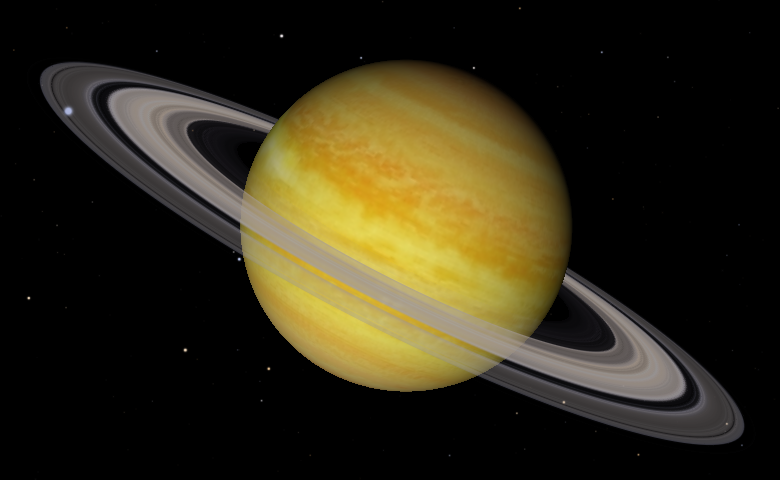 If the image pyramid has been created correctly, go on to the next step of creating the WTML files. If not, go back to the data and make the necessary adjustments.

Creating WTML files for the newly tiled study will make testing it, and including it in larger collections, straightforward. To create the two WTML files, go through the following steps:

If the Make .plate File checkbox is checked, then in addition to building the tile pyramid, a single .plate file will be output to the specified location. A plate file contains every tile of the pyramid, and a header section encoding the format of the pyramid. The purpose of this single file is that it is then much easier to transmit the pyramid to colleagues, copy to a backup file, or send it for some other purpose.

If the input image has AVM-tags, then the appropriate fields will be filled automatically with their values. For more details on AVM tags, refer to Virtual Astronomy.org. AVM tagging is a standard proposed by members of the professional astronomy outreach/educators community to tag astronomical photographs with useful metadata that contain details of what the photograph contains, how it was taken, copyrights, credits, and so on.

Images (currently, only TIFF images) can be tagged with AVM tags from FITS files using Adobe Photoshop and FITS liberator, or by using the online tagging tool available on the Virtual Astronomy site.

Open up WorldWide Telescope, navigate to the correct collections file, open it, and select the image to be aligned by clicking on the thumbnail. Click on the image itself when it appears in the main view, then press Ctrl-E. This brings up the Image Alignment dialog: 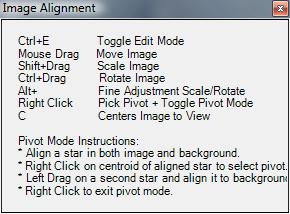 Use the controls in this dialog to finely align an image.

Note that there is currently no save or cancel options. If the data is in the correct folder, noted above, then the changes will be saved off to the Place entry in the WTML file.

Pivot Mode can be one of the easiest ways to align an image. Right-click on a point on the image that is in the correct location (typically a star), a white circle will appear to confirm this, then rotate, scale, and invert the image simply by moving the mouse. Right-click again to de-select Pivot Mode. Typically aim to align two significant stars that are as far apart as possible on the image to get the best alignment between foreground and background.

StudyChopper reads in default settings from the configStudyChopper.txt file when the tool is first run. Edit this file appropriately to make use of the tool efficient. This can either be done by hand, or by use of the Save Settings in config.txt button. This configuration file should reside in the same folder as the tool. The default contents of this file are shown in the following table:

Note — security issues may prevent the button/edited file from working as expected.

The Study Chopper tool can be run from a Command Prompt window, taking a single parameter — the name of an XML file, where the content of that file determines the required input and output.

To run the tool from the Command Prompt window: