A “collection” is a friendly name given to a WTML file. WTML is the user-editable file format designed specifically for AAS WorldWide Telescope. The Explore menu entry in the WWT interface is essentially a WTML browser.

Fairly simple examples of WTML files are those that contain only one type of object entry, for example a list of tours, or a list of studies. Potentially one of the most complex is a community payload file, which will often contain a hierarchy of folders, each folder containing a collection of sub-folders and objects. Objects can be tours, studies, panoramas, planets, all-sky surveys, and links. Examples of the most common types of WTML file are listed in the samples section.

Structure of a Collection File🔗

A collection file is coded in XML, and is a hierarchical collection of Folder entries. The following example can be loaded into AAS WorldWide Telescope and will appear as the image below, even though all the folders are empty. The example is based on a community payload file, though a very similar structure would apply to a hierarchical selection of tours or studies.

Note that the Name entries appear in the upper panel of AAS WorldWide Telescope, and that one unique thumbnail image for each Folder is helpful (though not required, a default thumbnail will be used if none is provided), and more thumbnail images will be helpful for each entry within each Folder. A substantial number of thumbnail images can be necessary if the collection file is large.

A place is simply a location for the view. Place entries are used within Studies to contain imagery, but can be present in a collection file as viewing points without any additional images. Place entries can also be used to hold links to web pages (articles, supporting documents, community website, and so on).

The following shows an example of a Place entry in Sky mode (a view of the southern star Canopus).

The following shows an example of a Place entry in Planet mode (the location of Olympus Mons on Mars).

The following shows an example of a Place entry containing a link (to a high definition image of a gully on Mars):

Thumbnail images are used frequently throughout AAS WorldWide Telescope to provide an image to go along with a link, either in the top pane under Collections or Tours, or in the lower pane as part of a context search. Typically if you prepare your own data you may well create a thumbnail image for it — usually be taking a screen shot then capturing a rectangle of interest to match the fixed sizes of the thumbnails given in this document. Note that URL entries for thumbnails should always reference the full path, and not a relative path.

An alternative is to request a thumbnail image from the thumbnail server. This is done by entering appropriate text at the end of the following query (the example requests a thumbnail where the title contains the word "Mars"):

If a thumbnail image is not found containing the supplied text, as suitable default is used.

Study images are stored in image pyramids. Given an W×H pixel study, it is represented as an N×N pixel image where N is the smallest power of 2 that is at least as big as W and H. In mathematical terms, N = 2^ceiling(log_2(max(W,H))). In simpler terms, if a study image is 958 by 768 pixels, it will be embedded in a 1024×1024 square bitmap. The extra area not covered by the W×H photograph is occupied by transparent pixels. This forms the lowest level of the pyramid, with each level up containing a lower-resolution version of the original image with half the height and half the width of the image at the previous level. At each level, the image is further divided up into 256×256 tiles.

The process of dividing up an image into this pyramid of tiles can be done using the Study Chopper tool. This tool not only creates the correct tiles, but places them in the required directory structure, and outputs sample WTML files to load them into WWT. 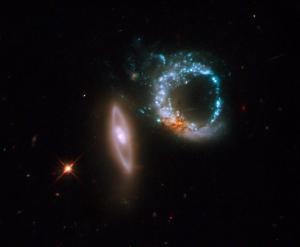 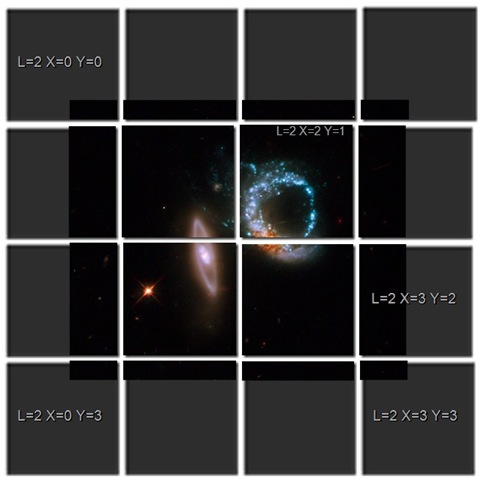 At level 2 there are sixteen 256x256 tiles representing a down-sampled 1024×1024 version of the image. The grey shadows show the transparent regions. Some of the tiles have been labeled with X and Y coordinates between 0 and 3 — which is how individual tiles of the pyramid are addressed at each level. 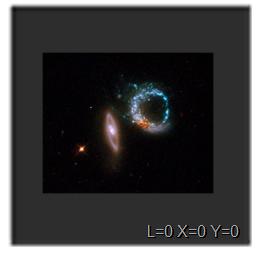 At level 0 there is a single down-sampled 256x256 version of the image.

The following images give examples of how the appearance of an image can be changed by varying some of the parameters.

The following text shows the starting point, with the resulting image shown below. 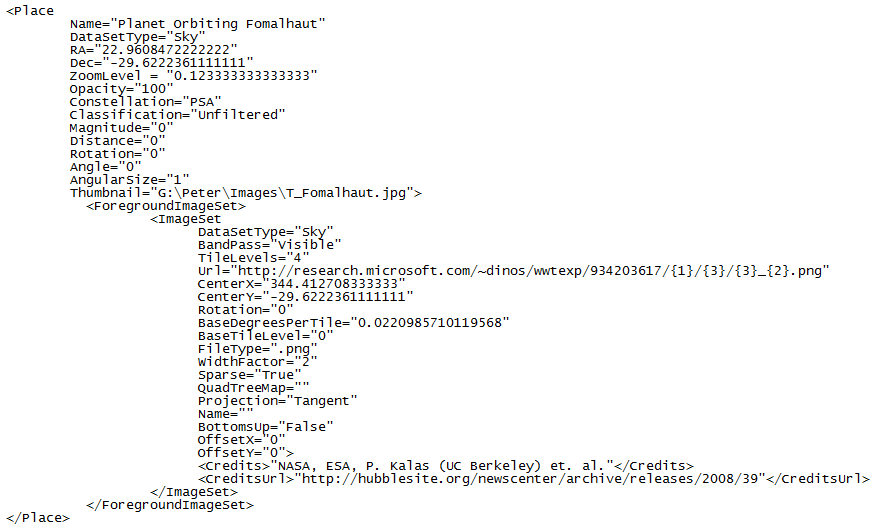 Changing the Rotation entry of the ImageSet to 45 will result in a 45 degree left rotation. If the Rotation was set at -45, the rotation would be to the right. 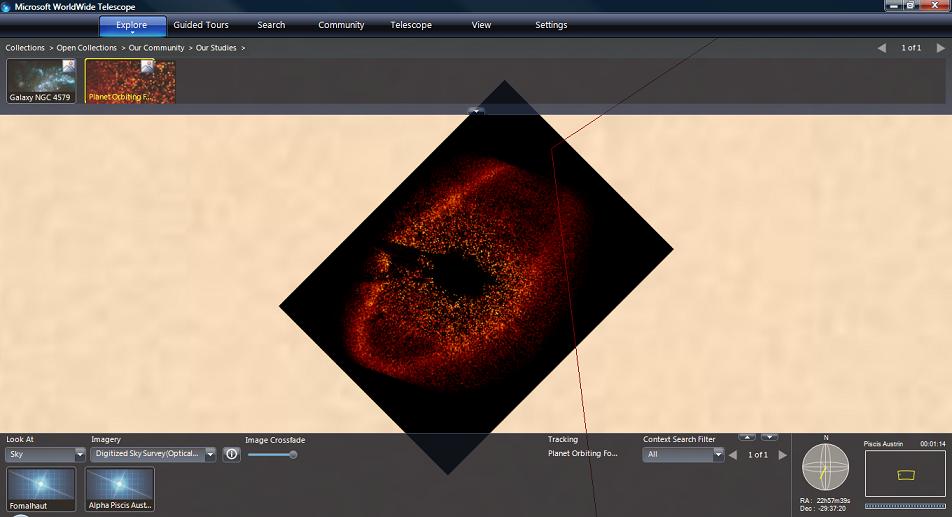 Leaving the ImageSet rotation at zero and changing the Place rotation to -45 degrees results in the following image. Note the apparent variation in the angle of the image, as the view is not perfectly aligned with the center of the image. 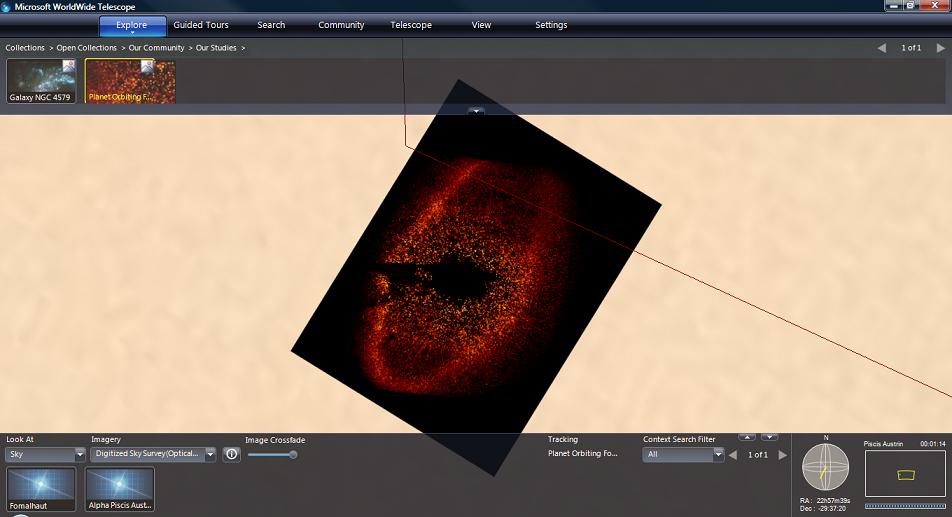 Leaving both rotation values at zero, and doubling the ZoomLevel to 0.246666: 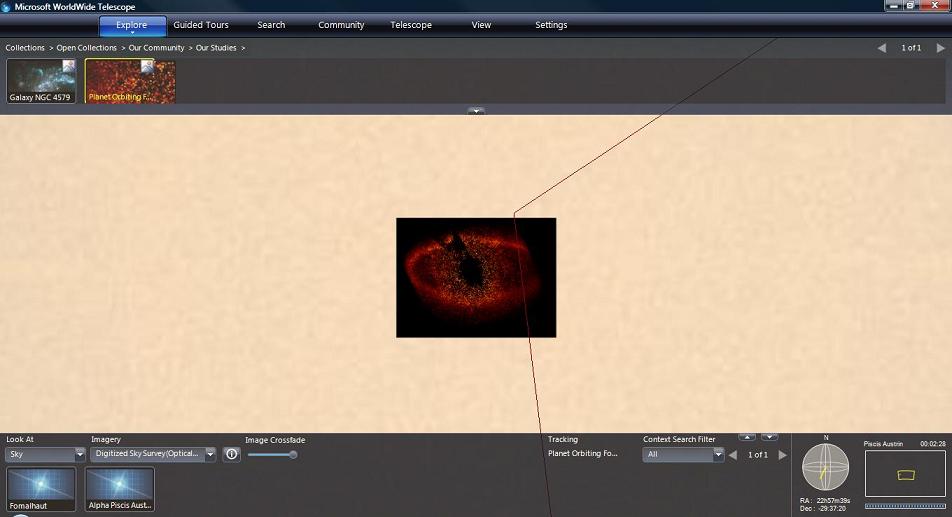 Changing the ZoomLevel to 10 results in a much more distant image: 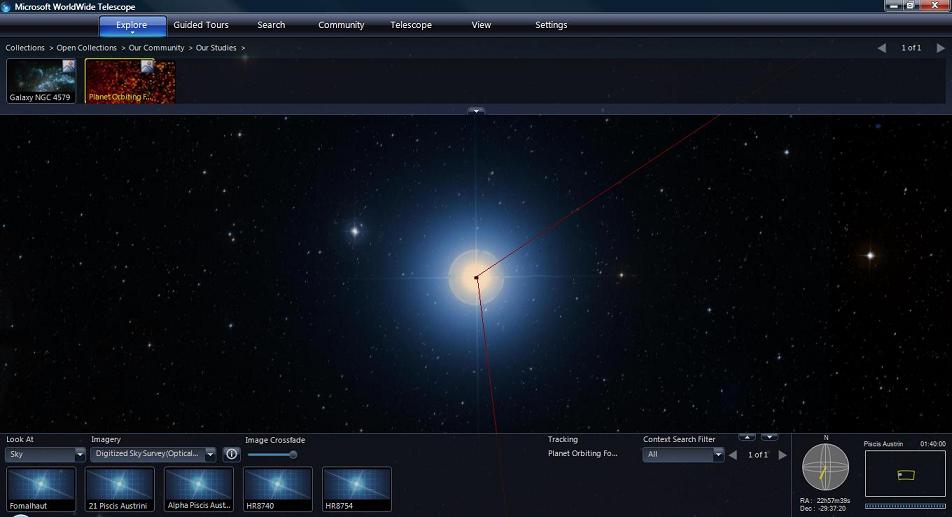 Changing the Opacity setting for the view to 25 (percent): 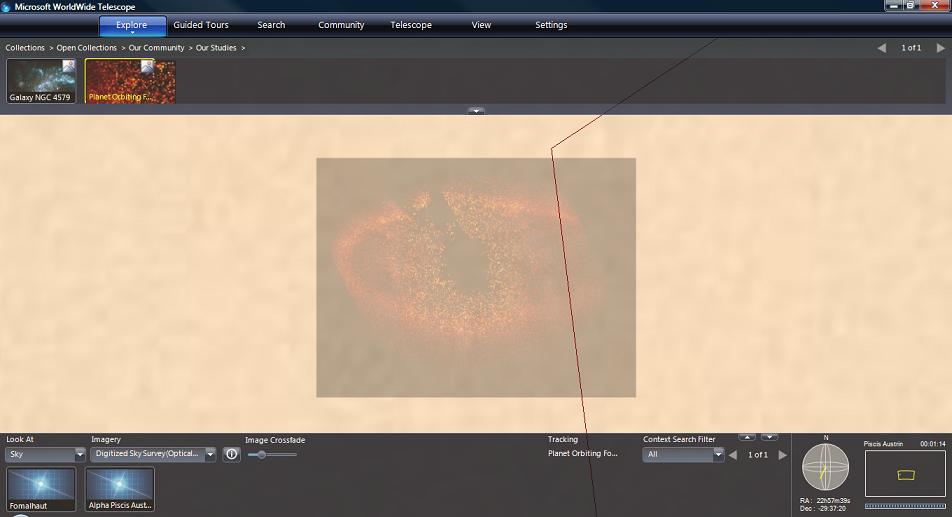 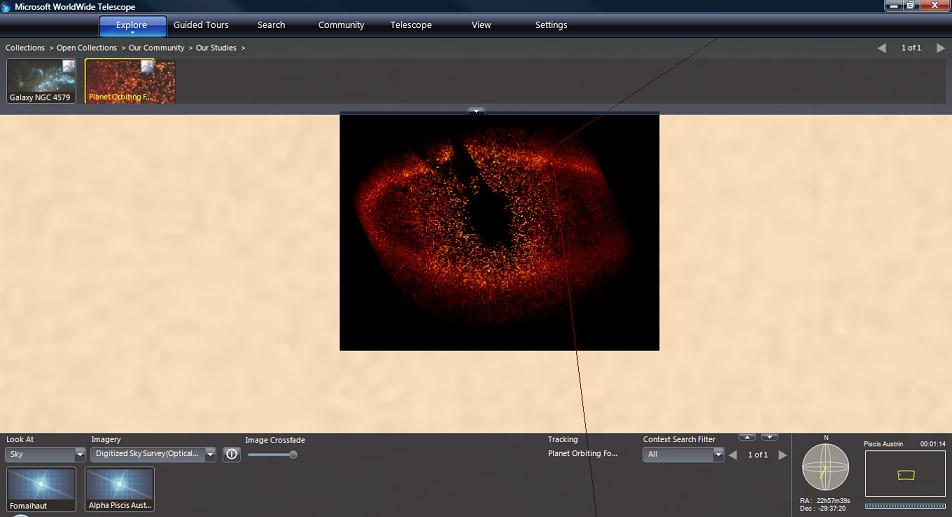 Similar to studies, the source image data is converted into an image pyramid for ease of rendering.

The WTML collection file used to render a survey is simpler than that for a study, as no positional data is needed. The orientation of the survey is determined using the Sphere Toaster tool.

There are few differences between the contents of a WTML file containing a study or a survey. In particular note that the Projection entry is set to Toast rather than Tangent.

The actual content of a tour is stored in a .WTT file. These files include a lot of binary information and are not designed to be human-readable. However, WTML files can contain references to tours. These references can be used in conjunction with a set of images, so that an appropriate tour or range of tours is available for the new image data (the references to the new images are embedded in the WTT file). Alternatively of course tour collections can be put together for existing image data.

All but two of the parameters in a Tour entry are optional, and are identified in the table.

The default tours used by the Windows version of AAS WorldWide Telescope are held in the tours.wtml file, in the following locations:

Currently there is not a supported process to add your own tours to this file.

Communities are the primary way in which AAS WorldWide Telescope users can share data and tours with each other. Communities can be made by any user, but typically are individuals or organizations, such as planetariums, science centers, astronomy clubs, magazines, bloggers, schools, classes, and for class projects. There is no limit to the number of communities that can be set up.

Setting up a Community🔗

You can set up your own community using your own servers and without any contact with Microsoft. However, you may prefer to have your community listed it on the WorldWide Telescope Community Directory (a subset of which is shown on the WWT Support page. To do this, send an email to wwt@aas.org, requesting that your community be listed. To be considered for inclusion in the community directory, community sites must maintain standards in terms of quality, scalability, and content appropriateness. These standards include:

To set up a community go through the following steps:

To set up a community, you should first add the AAS WorldWide Telescope file extensions to the MIME types on your server.

Create a thumbnail image for the community. This should be 176 wide by 45 pixels in height.

The payload file contains the main content for a community. This file determines the folder structure, images, tours, community metadata, and so on. In its simplest form, a payload file can be a static WTML file that is hand-edited on the server side. Alternatively it can be generated from a database, and so might be much easier to update regularly.

A signup file is a short WTML file that points to the thumbnail and payload files, and gives the title of the community. The following table shows a sample signup file, based on the signup file for the WWT Data Community.

A sample community signup file is also listed at sample-community-signup.tml

The signup file should be placed in a web-accessible location, and appropriately linked to from your institution/organization/club website.

A WTML file can include references to other WTML files, which can then be used to build up collections of collections, or add studies and surveys to a community payload file, for example. To include another WTML file in a collection, add the following entry:

The following table lists the samples that can be used as a starting point for WorldWide Telescope WTML file development.

Click on the Sample Name to view the source. Note that paths may need to be changed for the samples to work, these paths are highlighted by comments in the sample code.