The following projections can be used as the source for a conversion to the TOAST format:

With Equirectangular coordinates, every pixel represents the same number of degrees of latitude and longitude for planets, and degrees for Right Ascension (RA) and Declination (Dec) for sky surveys. Equirectangular projection is by far the most common system used to represent earth maps, such as the NASA Blue Marble map shown below. The utility of this projection is greatly assisted by the simple fact that very few people live near the poles, where the projection becomes problematic, in particular all the points along the top of an equirectangular projection represent only one point in 3D space, namely the North Pole. And of course there is a similar singularity for the lower edge of the map and the South Pole. 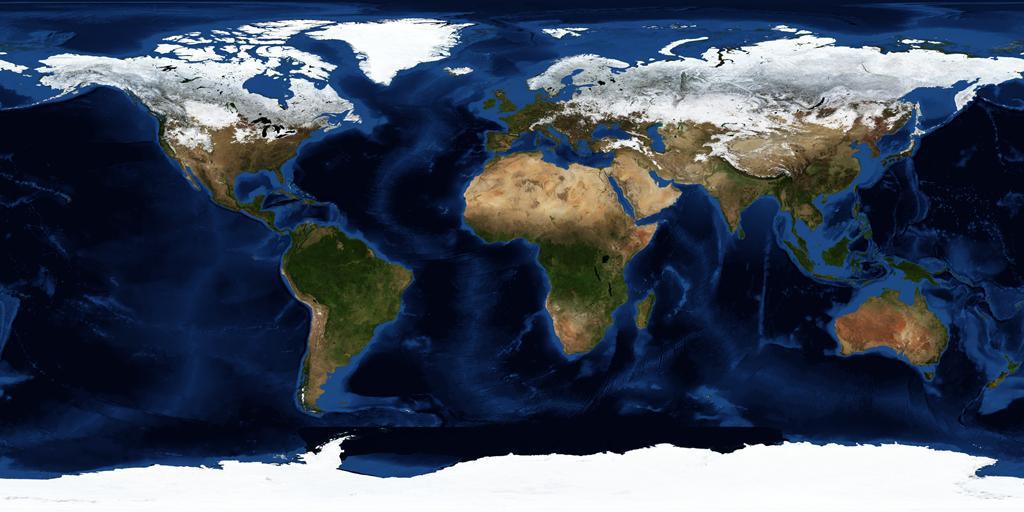 This composite image of Earth was taken in January 2004. (Credit: NASA, Visible Earth.)

The wider problem with equirectangular projections is that the relative sizes of objects (land masses in the map above) are substantially incorrect. An equirectangular image that covers the entire sphere will have a 2×1 aspect ratio, so it is two times as wide as it is high (a full circumference east-west, half a circumference north-south).

Mercator projection is a specific example of cylindrical projection — where horizontal lines are preserved in the mapping.