This section contains technical information on how to configure AAS WorldWide Telescope to run in environments other than on a single desktop or laptop client computer.

A straightforward example of a multi-monitor cluster is to have a single master computer, and a matrix of slave computers each rendering a portion of the view. 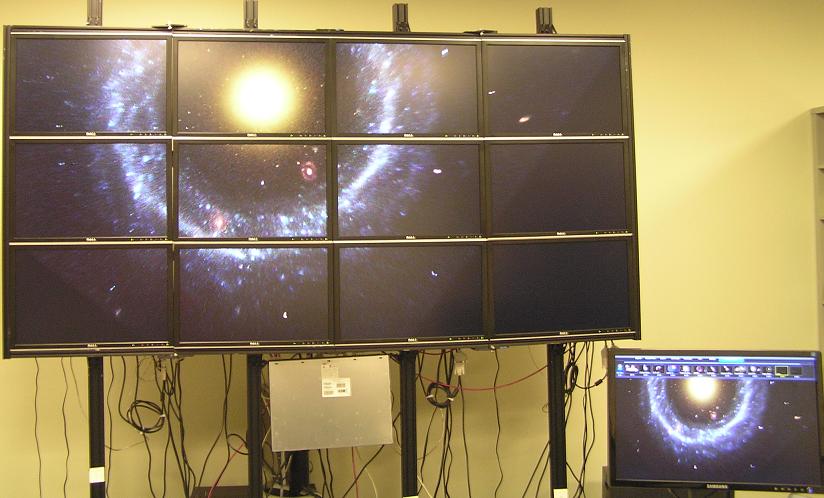 To setup a multi-monitor cluster, go through the following procedure:

Remote Starting of the Multi-Monitor Cluster🔗

With a large cluster such as the one shown in the image in the previous section, it is helpful to automate the startup and shutdown of all the slave computers from the master. To do this use the WWTRemoteControl utility. For this to work though, go through the following procedure:

A single projector planetarium is typically a small planetarium up to around 20 feet in diameter. To see plans and instructions for building a planetarium suitable for a small class of students, refer to WorldWide Telescope Planetarium. The key to single-projector planetariums is that the output has to be warped in such a way that it appears correct on the dome (or geodesic dome). This warping is most noticeable in the rendering of lines (rather than spheres). The image below shows Saturn and the Milky Way warped for a 16:9 projector. 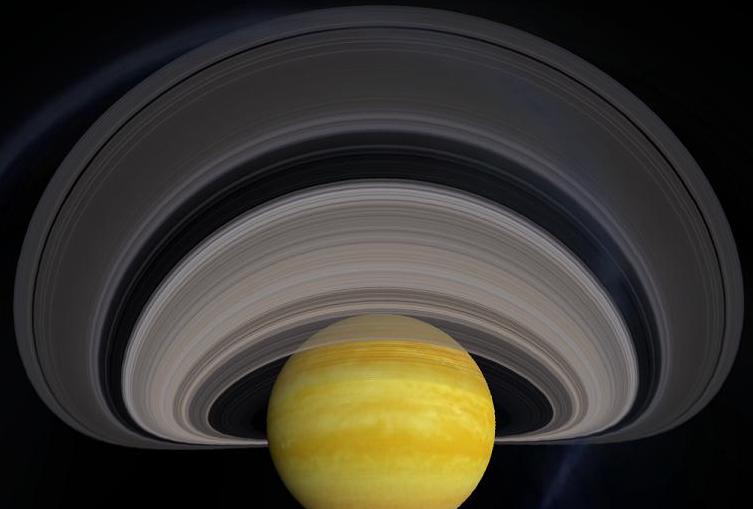 Select Full Dome from the View Menu Entries to initiate setup for a small planetarium.

Before clicking on Full Dome to activate the warping, select Dome Setup to provide a few basic parameters.

Start Listener is a toggle setting, used in Multi-Projector Planetariums, so leave this unchecked.

Detach Main View to Second Monitor will turn the current screen blank, and input control is transferred to the second view (dome or second monitor). 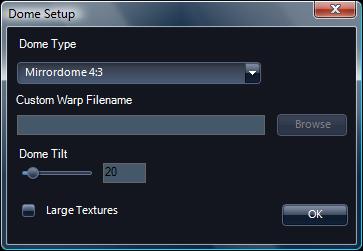 For Dome Type select from the drop down list:

The 16:9 or 4:3 numbers refer to the aspect ratio of the projector. These are the two most common specifications, however the option to create Custom Warp Files for other curvatures is provided.

Check Large Textures at higher resolutions, such as 1920×1080 or 1920×1200. With lower resolutions (1024×768 or 800×600) leave this unchecked so that no down-sampling is necessary. Also note that some graphics cards will not support large textures, and that large textures require four times the memory and pixel processing of small textures.

A typical setup for running WorldWide Telescope in a small telescope would be to have the software running on a laptop, with a 16:9 projector connected to the computer using an HDMI cable. When giving presentations in the planetarium it can be helpful to have the image present on both the dome and the laptop screen, in order to point out objects of interest with the mouse, for example. If this is the case then consider setting the screen resolution of the laptop to match the aspect ratio of the projector; the following table shows some common options:

If the option to Detach Main View to Second Monitor is used then there is no need to match screen resolution with aspect ratio. Also note that an Xbox Controller can be used to navigate in WorldWide Telescope, which can make controlling the view in the dome more comfortable.

Custom warp files should be used when the aspect ratio of the projector is not 16:9 or 4:3, or you are using a variant of the standard fisheye projector.

Warp files have a .data extension and can be created using a third-party tool called meshmapper tool described at the following website:

This website also contains a lot of interesting and useful information about small planetariums.

The following section applies to the use of WorldWide Telescope in planetariums that use multiple projectors and a blended image. Typically these are large and commercial or university planetariums.

Projection into a large planetarium is often done using six projectors, with each projector projecting onto an area of the dome — with special blending done to mask the edges. The following diagram shows two common six-projector projection layouts: 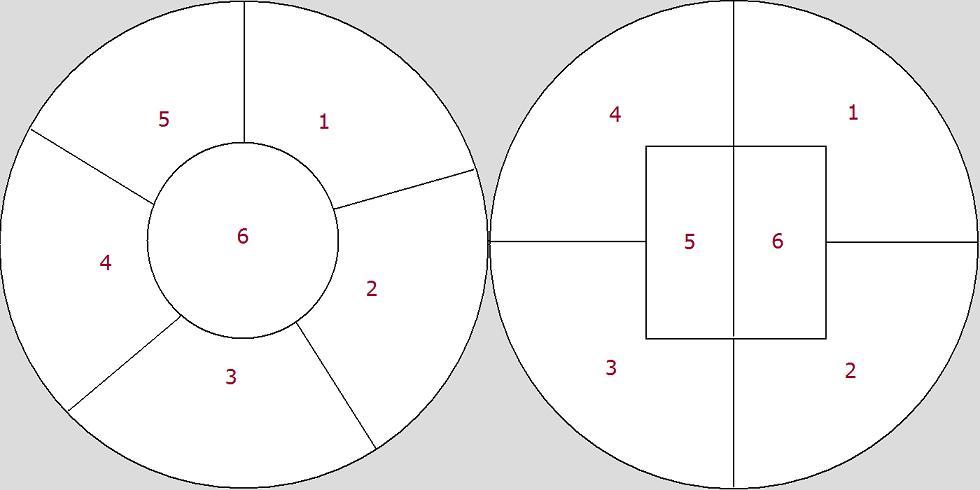 There are two methods of projection that can be configured in WorldWide Telescope, the first using P_rojection Designer_ software, the second using an external blending system such as Global Immersion. One of the main differences between the two is that blending is done by WorldWide Telescope when using Projection Designer, but is usually done in dedicated hardware when using external blending. The two methods require different parameters in the config.xml file.

Follow this link for more detailed information on Global Immersion.

Define the configuration file as follows: